Baseball’s Era of Experimentation: What it Means for Fans 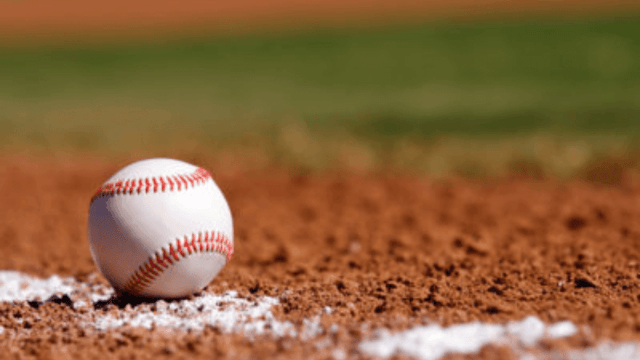 Those are just a few major strategy changes that have been implemented by Major League Baseball over the past few decades. Until recently, baseball’s rules have remained remarkably unchanged over the course of the game’s 150-year history.

But as the national pastime comes face-to-face with pace of play concerns, an aging fanbase, a new generation with handheld distractions and dwindling patience, and TV ratings that lag behind football and basketball, a rash of changes have been made to a sport that’s leaned heavily on history and tradition.

Keeping their eye on the ball -- and on consumers’ free time

MLB knows in order to grow their fanbase, they must speed up a game that has no time limit, a schedule that spans 162 games (not including Spring Training or the postseason), and a ball-in-play rate of 10%. Compare that to the NBA, often cited as relatively action-packed compared to baseball with about 36% of a basketball game containing constant action.

At the beginning of this season, MLB proposed their most aggressive set of rule changes yet, all aimed at accelerating the pace and making calls more efficient.

The controversial changes being tested are electronic umpiring, a ban on defensive shifts, larger bases, a three-batter minimum after a pitching change, moving the mound back two feet, and allowing batters to steal first base. You read that right: batters may run to first base on any wild pitch or passed ball (similar to the dropped third strike rule, but in this case, the count in the at-bat wouldn’t matter and neither would the number of outs in the game).

Stealing first base is one of MLB’s most radical experiments to date.

To stem the inevitable tide of criticism and public opinion, they’re taking a test and learn approach. And the independent Atlantic League is their guinea pig.

In February, MLB announced a three-year agreement where the Atlantic League will implement these experimental rule changes and study their effects. If any of the proposed changes prove successful in capturing the attention (and dollars) of young fans, without alienating baseball purists, then MLB will work with team owners and the player’sf union to adopt them and scale an experimentation mindset across the league.

Reactions so far this season from players, coaches, and umpires have been mixed, and it’s been covered extensively with commentary in trade publications and from baseball beat writers. Feedback that should be covered but hasn’t been is that of the fans. Which is a miss, considering the allure of experimentation is learning what customers want and adapting to those expectations in real-time.

It begs the question: Will baseball fans embrace these changes or will it affect their willingness to watch or attend games? We ran tests on Feedback Loop to find out.

Getting the fan reaction 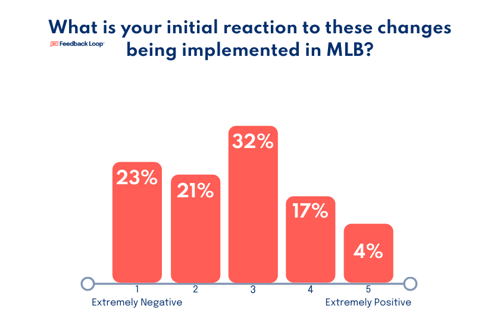 Nearly 50% of fans described their reaction as negative or extremely negative, with many suggesting baseball would begin to resemble a video game, not the sport they grew up watching. Fans were also concerned that these changes would fundamentally alter one of their favorite aspects of the game to watch: the nuanced strategy.

“Some of them change the backbone of the game, and I’m not sure that I would want those kinds of changes.”

Others simply took it as an affront to all that is right with baseball.

“Baseball is an old-fashioned game. Don’t make it something it’s not. Don’t take away its history.”

“Baseball is America’s game and not a science project. We should keep baseball the way it always has been.”

And some were still holding grudges from 1973.

“I like the game the way it is. The DH is still a travesty to me.”

Not every reaction was negative. Fans who supported these changes were in favor for exactly the reasons MLB chose to implement them: The game is slow and they aren’t willing to attend an event for 3 hours (maybe more if there are frequent pitching changes or the game goes to extra innings). In their minds, these changes use new technology and innovative ways to hold their interest. 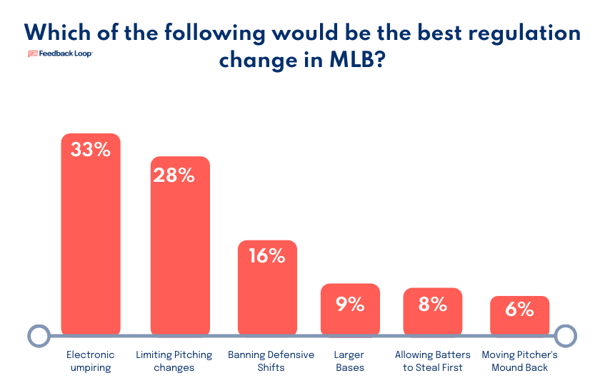 “Most disagreements are over balls and strikes. This will solve the problem completely.”

Other respondents elaborated, saying this change seems like the path of least resistance to innovation, considering the sport is already leveraging technology in other ways.

“Not in favor of any, but I could tolerate electronic umpires. After all, baseball’s basically doing it now anyway with instant replay.”

“Everyone has to change with the times and technology is at the forefront. This would be a fair and unbiased way to umpire. We already have screenshots on the TV showing us where the ball went and whether the ump was right or wrong.” 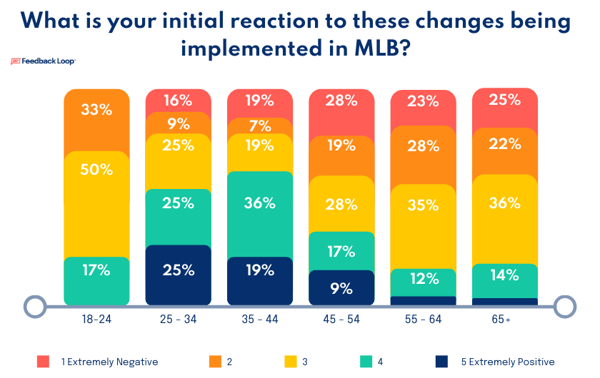 When you dig into the demographic data, that’s when the results get really interesting. The older someone is, the less likely they are to have a positive reaction to these changes.

Which makes perfect sense if you think about it: The average age of a MLB fan is 57 years old, which is notably older than the fanbases of other major sports. Baseball knows this, and they’re actively trying to reach and excite younger fans.

“As the national pastime comes face-to-face with pace of play concerns, an aging fanbase, a new generation with handheld distractions and dwindling patience, and TV ratings that lag behind football and basketball, a rash of changes have been made to a sport that’s leaned heavily on history and tradition.” 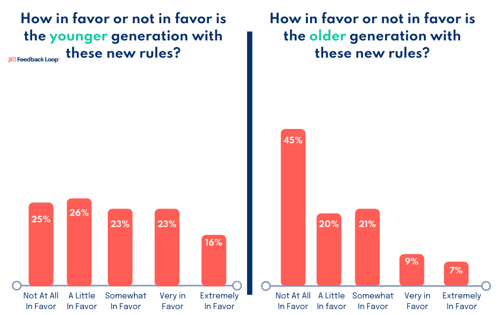 Younger fans love the promise of efficiency and speed. Baseball is the only sport that has no time limit -- no buzzer, no clock, no innings limit. For young fans, that’s an unacceptable drain on their most valuable commodity: their time. 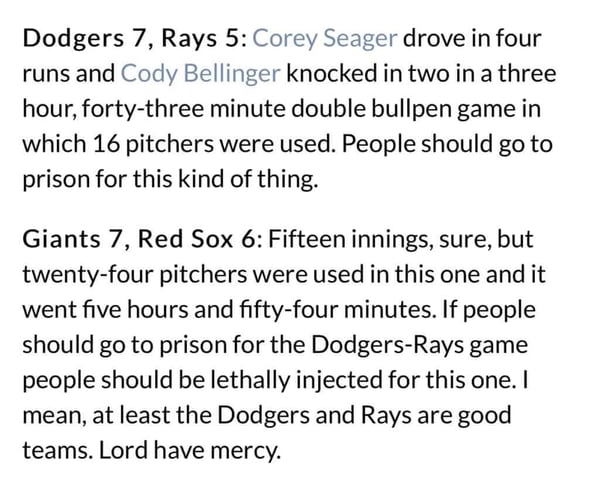 Meanwhile, older fans feel tradition crumbling around them. And as the average age of MLB fans continues to skew older, the game risks pushing them away as they court the sensibilities and concerns of a younger demographic.

This ongoing tension in baseball creates the perfect circumstances for experimentation.

As fans’ expectations evolve, how can the business of baseball embrace experimentation to attract all kinds of fans, next season and beyond?

No doubt these topics will come up at the 2019 Winter Meetings in San Diego, a place where baseball executives, MLB and MiLB team representatives, media, and job hopefuls convene to network, conduct trades, and discuss trends.

While baseball is steeped in tradition, it’s not impossible for the game to improve with the times. In fact, it’s been done before. Change happened in 1973 when MLB introduced the designated hitter. And in 2017, when games began streaming on Facebook. Or in 2018, when MLB slowly began to re-evaluate their stance on sports betting once it was legalized. Now that 13 states have legalized gambling, the jury’s still out on what this means for MLB’s bottom line and its lagging fanbase.

The question then is not whether innovation and evolution will be necessary but whether MLB is experimenting with the right changes, ones that break new ground while adhering to beloved traditions.

What will the smart bets be, in an environment where the fans today look nothing like the fans of yesterday? Some overlapping ideas and themes emerged, including:

Will this be the next level of experimentation that helps MLB satisfy its aging fans, establish a fanbase of the future, and bring in the next $10 billion for the sport?

As Expectations for ‘Insights on Demand’ Grow, What’s the Ripple Effect on Market Research?

We’ve all known this person (or maybe we are this person): Activity tracker firmly attached,...

All Hail the Disrupted Consumer: Research and the New Normal

Everyone is talking about what the “new normal” will look like.