How Rhino Found Their Moment — and Their Voice — with Feedback Loop 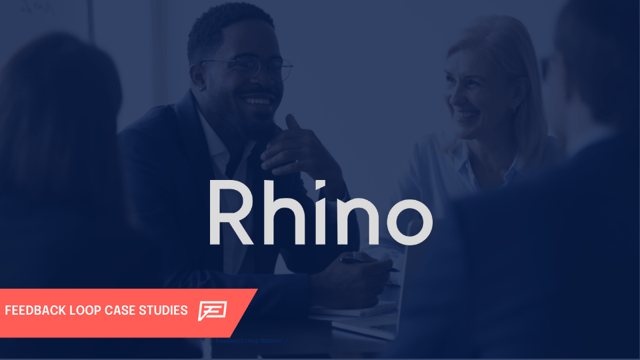 In just a few years since their founding in 2017, Rhino has introduced an affordable security deposit alternative to the real estate market that relieves renters from the upfront costs of renting — and benefits landlords, too.

Using Rhino, renters pay a small monthly fee for an insurance policy instead of an expensive upfront security deposit. Owners, in turn, rely on Rhino to protect their units against damages and unpaid rent. “Across the country, $45 billion (that’s billion, with a ‘b’) is locked away, trapped in the form of security deposits,” writes Rhino co-founder Paraag Sarva. “Renters shouldn’t have to fork over huge sums of cash to rent an apartment. We’re making sure they don’t have to.”

Many of the necessary pieces for product-market fit were in place when Rhino launched. As rents and the cost of living skyrocket, security deposits are a steep financial barrier facing renters at a time when financial flexibility is more important than ever.

Rhino knew they had an audience and a market need. The company used tools like Zillow and StreetEasy — which brokers or landlords can use to advertise ‘deposit-free’ units — to help Rhino understand the moving and living experiences of the millennial audience.

But those tools cast too wide a net.

In order to capture the immediate relevance and need for their product, Rhino had to uncover the distinct experiences, preferences, and goals of young renters. These included defining characteristics, past renting behavior, and move intent. Rhino then had to cater to that exact customer profile.

Armed with these learnings, Rhino determined that targeting ‘every renter’ was far too general.

“We realized that it actually doesn’t matter if someone rents. What matters is how often they rent, how recently they moved last, and when they’re planning to move next,” says Hanna Chen, director of product marketing. “You have to tailor the audience to the exact moment or space that your product occupies.”

Using Feedback Loop, the Rhino team began to test concepts and generate consumer feedback with this highly relevant audience, dubbed ‘repeat renters’: those who had moved in the past 3-5 years, were currently renting, and were planning to move within the next 6 months.

In other words, those ready to experience the ‘Rhino moment.’

“Now we know who we’re speaking to. We know who we’re building our product for, and we know how it will benefit them through their renter journey. Being able to specify things like the voice we use for this audience, we attribute to Feedback Loop.”

The ‘repeat renter’ became the foundation for all subsequent tests. Rhino used Feedback Loop to ask questions of this audience regarding their pain points around security deposit requirements, what features they were most familiar with and trusted most in an insurance product, which value props and messaging resonated the most, and through what channels they preferred to receive communication on.

Feedback Loop uniquely enabled Rhino to fine tune their audience, quickly source and stockpile feedback efficiently, and pivot back and forth between the insights. And what they learned helped to clarify their brand story, messaging, and website.

In a series of tests, Rhino learned that renters needed more clarity into the company's business model and how Rhino's partnerships with property owners worked. They even generated insights into what kept site visitors from signing up for the service.

Rhino also gathered evidence from Feedback Loop’s testing that supported the startup's understanding of how to prioritize different value props. For example, Rhino had long theorized that the value of choice was a better messaging strategy than touting cost-savings. This was validated using Feedback Loop.

“It just doesn’t make sense to pay a security deposit anymore, and there’s a choice in the matter now, so we’re working to support that choice with the best and clearest option,” says Mei Lui, director of product at Rhino, noting that feedback from Feedback Loop’s platform inspired them to develop the business and Rhino product explainer that they use across their digital and print collateral.

“It gave us the confidence to keep emphasizing this idea,” says Hanna. “Now we know who we’re speaking to. We know who we’re building our products for, and we know how it will benefit them through their renter journey. Being able to specify things like the voice we use for this audience, we attribute to Feedback Loop.”

Toggle® generates revenue a year ahead of schedule

A lot has changed since the 80s, especially technology. Toggle, a new startup within Farmer’s...