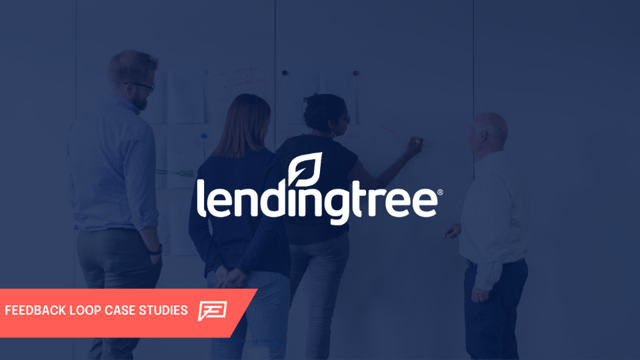 In 1996, Doug Lebda wanted to buy his first home. His miserable experience with trying to find a suitable mortgage led him to build LendingTree, which is today one of the largest networks of lenders in the country. The organization has persevered through a national housing crisis, an acquisition, and a spinout, relentlessly emerging stronger in pursuit of a future in which lenders compete for borrowers in order to give them the most competitive loans for a variety of meaningful transactions. Perhaps more than ever before though, LendingTree is at a crossroads. Historically perceived as a one-and-done site to acquire a loan, the company aspires to be something more.

“We’re at a point where we have the brand strength and credibility to really invest in and build a relationship with our customers,” says Charles Battle, Senior Director of Product Management at LendingTree. “We’ve always been very transactional, but [now] we want to stick around and be the sidekick for our customers as they continue on their financial journey.”

Doing so means broadening his team’s purview of the customer experience and embracing a culture of rapid experimentation. That’s why LendingTree leverages Feedback Loop’s rapid consumer feedback platform to prioritize their product roadmap and avoid spending up to eight weeks building features that don’t move the needle. According to Battle, Feedback Loop enables LendingTree to make smarter product decisions 8x more cost-effectively than before.

Objective data on demand and at scale

“Wonderful companies, especially rapidly-growing startups, tend to think they are their customers because they’re designing a product that they themselves want,” says Marie Boucher, Senior Manager of Consumer Insight. “That’s LendingTree to a tee.”

The company’s origin story is so powerful and ingrained in the minds of employees that it can be difficult for them to fully appreciate the scope and diversity of the market. “Now that LendingTree is more of a mature company, we have different segments of consumers and we need to address their needs,” Boucher explains.

A year ago, Battle’s team realized that their approach to decision making could no longer scale. “Gut drove a lot of what we built,” he admits. It was common for features to be added directly into the development queue after having only been casually shopped around internally for feedback. A/B testing commenced post-launch but had limited effectiveness if a new feature missed the mark entirely.

In his three years at LendingTree, the company roughly doubled in size, putting pressure on Battle to find ways to prioritize a growing list of requests and opportunities. “As we scale and as we have more product managers, we still feel resource constrained in terms of engineering,” Battle explains.

“Now when I have a hunch, I put it in Feedback Loop, and then have something designed and tested, and within a few days I can make a more informed decision about involving additional resources,” says Battle. “The process is becoming more rigorous which is great.”

For Battle, rapid experimentation isn’t just about discovering winning ideas, but also about saving time and resources throughout the product lifecycle. He points to numerous examples of feature ideas that engineers had sized as an “XL”, meaning they’d take 6-8 weeks to develop. Feedback Loop enables his team to test and evaluate concepts much faster and more cost-effectively.

“Feedback Loop has been incredibly helpful to us in deciding where to place smarter bets,” Battle proclaims.

Like every company undergoing a cultural shift, LendingTree understands that change doesn’t happen overnight. By combining a strong company vision with Feedback Loop’s technology, they’re streamlining and accelerating the transformation.

“For us, it’s no longer about form conversion rates and getting people through the form as fast as possible,” Battle says. “It’s about getting through that form and then actually closing a loan, and then, beyond that, people giving us a positive net promoter score. That people are coming to the site, having a good experience, and then telling their friends and family about it. That has been a tectonic shift in the way that we approach things.”

Boucher uses Feedback Loop in creative ways to align product experiences with customer expectations. "The things that contribute to a negative net promoter score are misleading experiences. In financial situations, in particular, surprises are bad,” she says. “So when we're designing an experience, we need to make sure that it’s not surprising, that it's not misleading, that it creates trust — that's why on Feedback Loop, we test prototypes and ask users questions about what they expect to happen next before it happens.”

Ultimately though, speed is more important than any individual experiment or technique when it comes to achieving customer-centricity.

"Test things quickly, fail quickly – [they’re] wonderful attributes of an agile environment,” Boucher explains. “But from my perspective, the critical aspect is actually taking away the barriers, and making sure when somebody asks me the question, I don't say that it’s a 4-month research project.”

“Being able to answer the question quickly helps me integrate asking questions into future projects. As soon as that barrier is gone and people realize it's not a problem, it's not going to be a detriment to them to ask me the question, then they'll ask more questions. And the more questions people ask, the more those processes get improved."

A success story with an even brighter future

“I feel like I learn something with every test,” Battle says. “Because you know we think we have it right, but we really don't know what we don't know because we're not our users. It's important to remember that."

The LendingTree family is growing. If you’re looking to join a deeply passionate team that is delivering meaningful innovation to digital lending, apply on https://careers.lendingtree.com/

Background A curated online marketplace of small boutiques and brands for women, Jane is a...

Feedback Loop: Welcome to Agile Research for All Stakeholders

At Feedback Loop, we help companies thrive by learning faster and innovating smarter. Our mission...