Finding a Fan-Fueled Name for the Washington Football Team 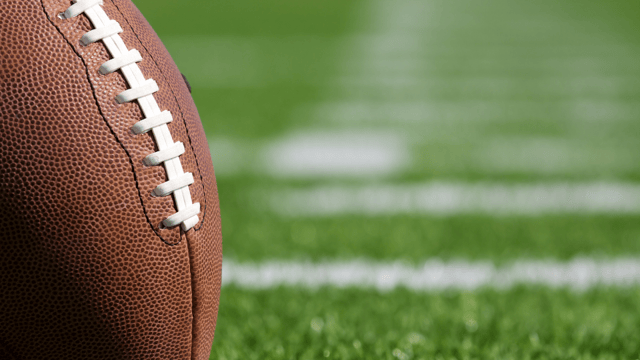 It’s that time of year again. And in a year filled with really unusual things at every turn, it’s reassuring to be able to focus on something as “normal” as football. That’s not to say that getting to this point in a weird football season has been without its share of drama. With the big game on Feb. 7, we decided to look at one of the more dramatic announcements of the past season: the renaming of the Washington Football Team.

Corporate rebranding is never easy. Change is hard for most people, and Americans are very invested in the brands they love or even just like. For a cautionary tale of what can go wrong, take a look at when Tropicana changed its logo — just its logo! — and subsequently lost a fifth of its sales in a matter of weeks. We announced our own rebranding in September 2020, and our evolution to Feedback Loop was not without great effort and myriad challenges. So we get it.

Calls to rename the Washington football franchise, whose brand is worth some $3.5 billion, have been around as far back as most fans can remember. While the previous name was long seen as an affront to Native Americans, some of the team’s diehard fans, including team owner Dan Snyder, swore they’d never remove it. But as America grappled with social unrest related to racism during summer 2020, the organization finally announced it would retire the controversial team name. They launched a website at the start of the 2020–2021 season, through which fans can submit their own suggestions and stay up to date with rebranding efforts. In the meantime, the organization chose a temporary name: Washington Football Team.

We’re big football fans here on the Feedback Loop marketing team, so we decided to jump into the game and help rename the Washington Football Team just in time for the Super Bowl. Naturally, we turned to Feedback Loop’s agile research platform. We tapped the crackerjack experts on our research team to ensure we were asking the right questions and targeting the right audience without introducing bias. We knew from our work with customers looking to refine their marketing collateral, name products and features, and quickly optimize messaging, that we were in good hands.

First came an open-ended text-response question asking participants for their choice for a new team name. 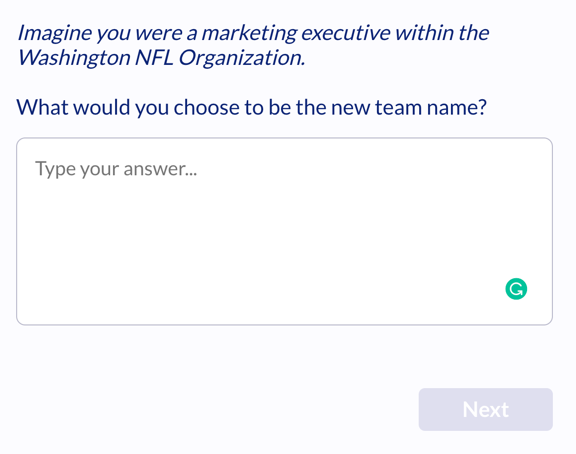 The results of which provided eight potential team names:

We conducted a follow-up test, asking a series of questions using the list of eight proposed team names, including:

1. Fans are attached to the old name. “Redskins” was the second most-common answer to the question, “What would you choose to be the new team name?” Further, 76% of participants agreed with the statement, “The Washington NFL organization should keep the name Washington Redskins.” Only 14% of Washington football fans think the Redskins name should be retired. As for the current name of “Washington Football Team,” 26% of fans dislike it. 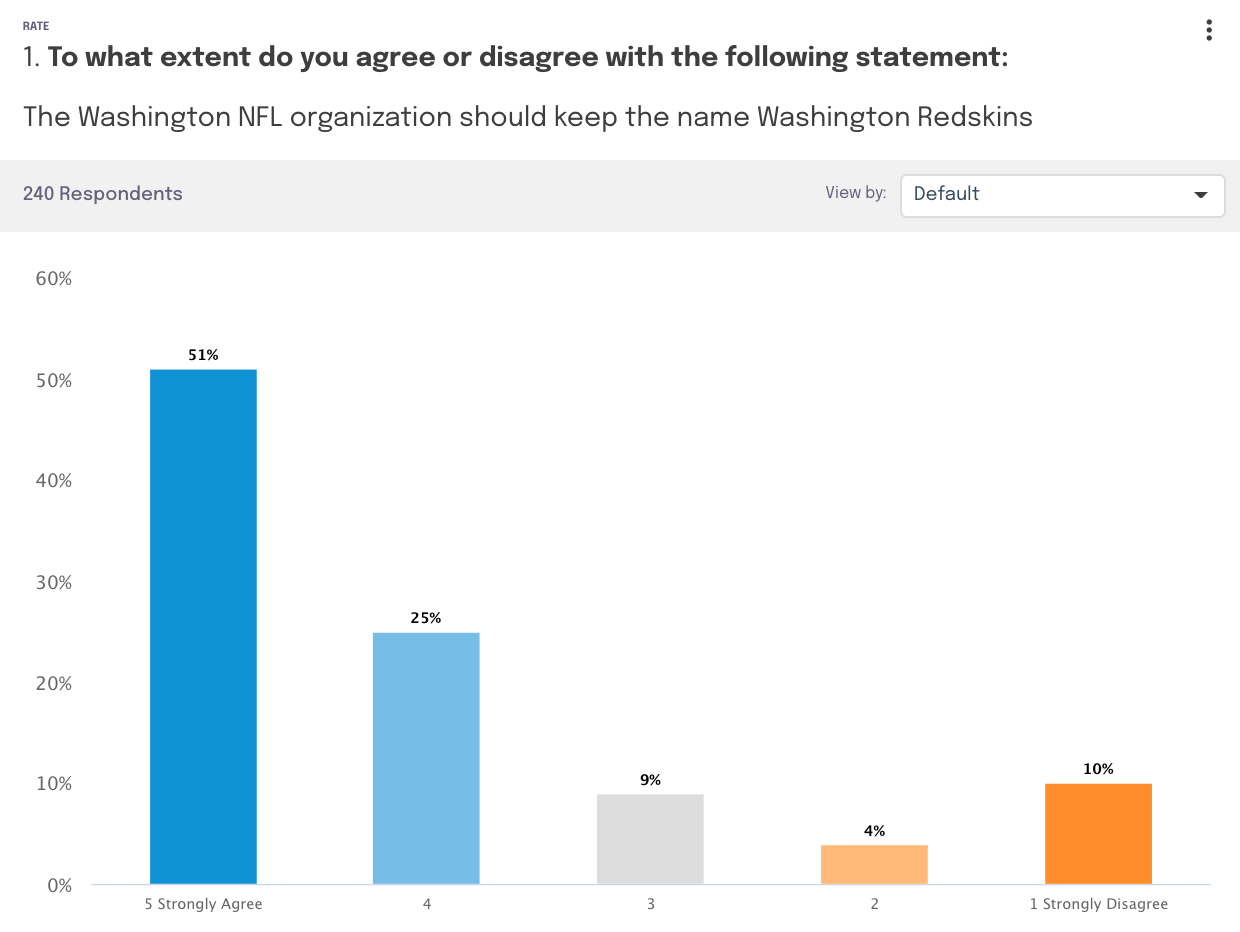 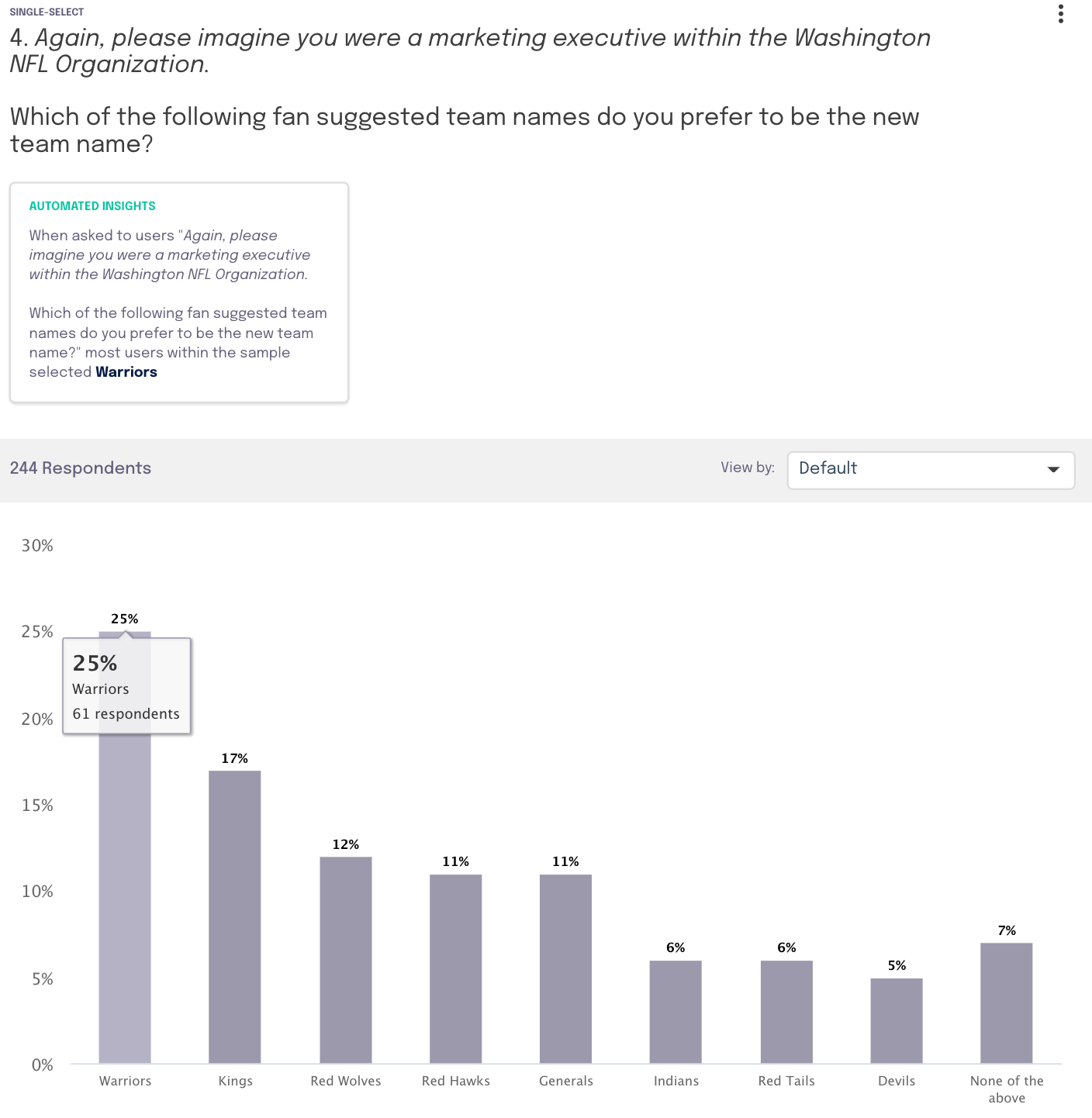 3. Fans indicated a desire to maintain the color red in the team identity. When asked what they would choose for the new team name, the word “red” appeared in more responses than any other suggested answer, and two of the three top-ranked names included “red” in the name: “Red Tails” and “Red Hawks.” The third-ranked name was “Devils.” 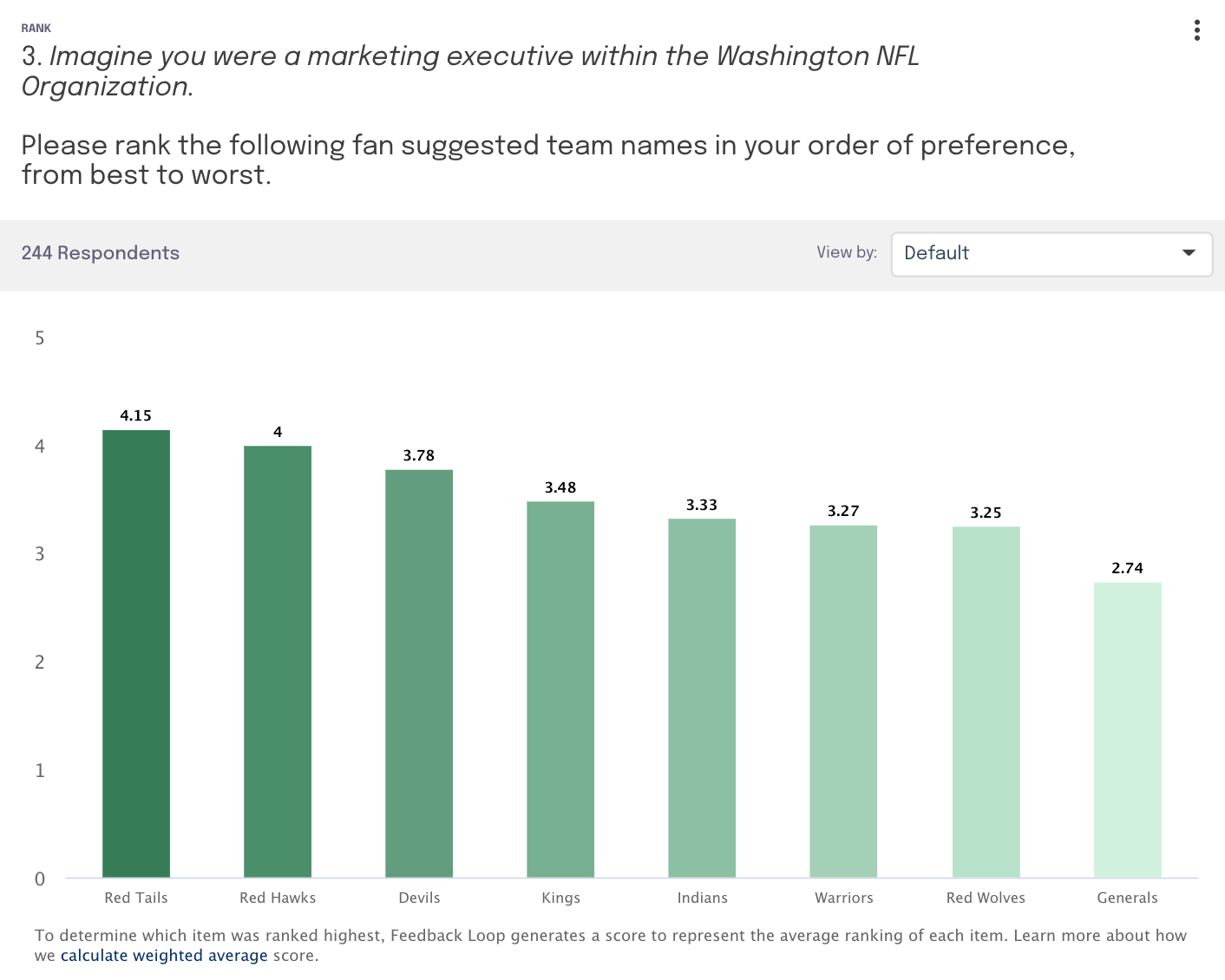 As it always does, agile research raises new questions, and Feedback Loop proved to be a perfect way to crowdsource feedback for this growing rebrand. Some areas that could warrant further exploration include:

Now that we have helped the Washington Football Organization inform its rebranding efforts with feedback from real fans using Feedback Loop, the agile research platform for rapid consumer feedback, we’ll kick back and watch the game.

Black lives matter. Racism is intolerable. We strive for a future when these things go without...

Background A curated online marketplace of small boutiques and brands for women, Jane is a...

Feedback Loop: Welcome to Agile Research for All Stakeholders

At Feedback Loop, we help companies thrive by learning faster and innovating smarter. Our mission...