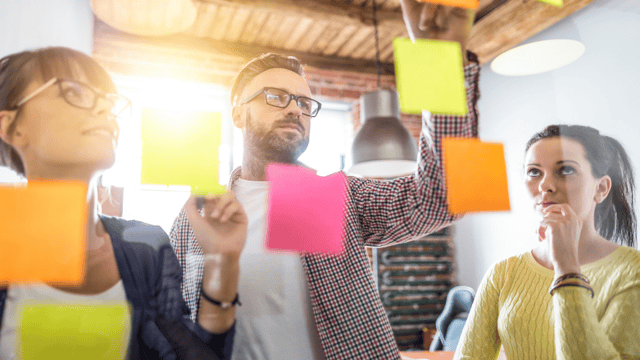 Design thinking is built around humans and feedback. It is an iterative process, where you challenge an assumption by asking a question of real people. Then you iterate on it and do it again to see if you’ve been able to solve your problem or create new problems through solving that problem.

If you’re an agile research practitioner, that might sound awfully familiar.

Agile research is also an iterative process involving real people. Rather than conducting long, comprehensive research studies, you employ short, sequential questions that build on each other to inform your next question and next steps.

The two concepts are so similar that they are often used synonymously.

“Thinking like a designer can transform the way organizations develop products, services, processes, and strategy. This approach, which is known as ‘design thinking,’ brings together what is desirable from a human point of view with what is technologically feasible and economically viable. It also allows people who aren't trained as designers to use creative tools to address a vast range of challenges.” —IDEO

IDEO is the company that popularized design thinking, which traces its strongest roots to the 1970s and earlier. Design thinking also took hold at academic institutions, such as the Hasso Plattner Institute of Design at Stanford University (often called the d.school), which defines it as a methodology for creative problem-solving. Google Ventures took notice and started doing workshops with cross-disciplinary teams to creatively solve problems using these methods. It soon spread to the startup world and became part of VC culture, since companies could learn quickly without doing expensive and time-consuming long-term studies. They could find out about potential customers by talking to them and getting a couple of questions answered before they moved forward to their next step.

“Agile research eliminates dependencies and friction that can slow down traditional research studies, trading off precision for directionally useful feedback that enables rapid learning and iterative improvement. At its core, agile research provides directional guidance early and often to guide decisions that might otherwise be driven by opinion rather than data.” —The Quick Start Guide to Agile Research

Agile research evolved from the turn-of-the-century movement toward agile software design. Agile research challenges assumptions and does it quickly. It’s about knowing a “good enough” set of data is always better than no data. You know something about the people of whom you are asking questions. You have quotes, or you’ve watched them do something, or you know why they work in a certain way or why they don’t work in a certain way. It’s being able to question and answer those questions, whether that’s proving or disproving your assumption, as quickly as possible.

These days, where one term ends and the other begins is unclear. Calling the methodology agile research seems to have made these iterative processes more approachable. Design thinking may be a trendier, cooler-sounding term, because of its connection to the d-school, startup culture and venture capitalists. But at the very core of design thinking is the idea that you don’t have to be a designer to do this. You don’t even have to work at a company that uses design. You can be in any industry and still apply these methods.

A common thread is failing fast, so you can iterate fast. The quicker you fail, the quicker you can answer your questions. It’s a common iterative process. You want to iterate as quickly as you can with as much data as you can get. And the more iterations you do, the more answers you’ll get, so you don’t spend as much time and money trying to solve all your problems at once — that is at heart of both.

How Agile Research Can Keep You Moving Forward

We researchers are often correctly accused of being perfectionists. We want precision, and we want...

Is ResTech the Answer to your Research Questions?

I had the pleasure of presenting at the virtual ResTech Conference at New Orleans Entrepreneur Week...